Success is the result of preparation meeting opportunity. Such is true for Ashley Lamothe, who became one of the youngest Chick-fil-A franchise owners at the age of 26. At just 15 years old, Lamothe had no idea how much her life would change when she picked up a part-time job at Chick-fil-A.

Though her goal was to save up for a car, she realized how much she loved the brand. Lamothe continued working at Chick-fil-A during her education at Spelman where she built a strong reputation for herself. She proved she was able to successfully lead teams and build meaningful relationships, all while meeting sales goals.

In 2011, Lamothe opened her first restaurant near the University of Southern California, which made her the youngest black woman to own a Chick-fil-A at the time. Seven years later, Chick-fil-A selected Ashley to open the very first Chick-fil-A in Los Angeles which she currently owns & operates today.

This month, The Colors of Her Success caught up with Ashley to chat about her journey from working the drive-thru window to owning her own Chick-fil-A restaurant in booming downtown LA.

What does it mean to own a Chick-fil-A franchise?

A: Being a franchisee at Chick-fil-A essentially means that I am in partnership with Chick-fil-A. I have been selected to run, own, and operate a Chick-fil-A restaurant here in Los Angeles. As the owner, I'm responsible for upholding all of the restaurant procedures, recipes, etc.

I am responsible for everything that goes down inside those four walls. The beautiful thing about a franchise is that I am in business for myself but not by myself. I am fortunate enough to have Chick-fil-A as a business partner with a franchise.

According to the Business Insider, Chick-fil-A receives over 20,000 inquiries from franchisee candidates every year. Only 4% of applicants get selected. What do you think made you stand out?

A: The differentiator for me was that I had hands-on restaurant experience, and I was willing to go into a market that was new and emerging. I grew up working for Chick-fil-A when I was in high school and all throughout college. When it came time to apply for the restaurant I was interested in, I already had a lot of experience.

I was also able to articulate how I could come into the business and help elevate the brand in LA. The USC location that I got selected for was the very first Chick-fil-A restaurant in LA, and there was not a lot of brand awareness or interest. I thought that I would stand a higher chance of getting selected if I was open to some areas of the country that weren't as competitive.

Tell me about your Monday morning routine.

A: I try to be as proactive as I can. I'm a list maker. I love writing down and visually seeing what I need to accomplish. I always spend the first couple of hours on Monday working through my plan for the week.

I create a thorough list of all of the things that need to get done. And then, I evaluate what on this list are things that only Ashley can do. Is there anything on that list that somebody else can do? If so, I will pass it off.

"I set my intention for the week, and I think that is so important."

Check out how Ashley's spends her Monday Morning

Jason Bilotti, the owner of the Northside Parkway Chick-fil-A in Atlanta, said, "She was a leader, meaning people wanted to follow her." What do you believe is the secret to your success in leadership?

A: Jason Bilotti is the operator that I grew up working for. Thinking back to the early days, I learned a lot from him.

What that meant was, it's not about what you know at all. It's more about your heart and your commitment to the team. It's about your ability to get your hands dirty with them and fight through the ups and downs. It's about being able to relate to people and treat them with respect.

Once people respect you, they'll bend over backwards for you. They'll work open to close and will literally do whatever for you because they know where your heart is. I transitioned restaurants [Downtown Los Angeles] and was able to bring my entire leadership team with me. Everybody wanted to go.

I think I have always been a leader that people want to follow because I'm relatable. I'm not better than anyone, and I'm not above doing anything that anybody does in the restaurant. I've done everything in the restaurant. That's how I lead. I'm not just some business owner that comes in quarterly and is only concerned about the bottom line. I am concerned about the bottom line, but I am a whole lot more than that.

You make owning a Chick-fil-A look effortless. What are some of the most challenging lessons that you had to learn in this role?

A: Going back to 2011, the USC location was pretty low volume as far as sales were concerned. I was doing EVERYTHING in the restaurant. I was the HR person, I was training, I was making schedules, and more. I was doing it all because that's the kind of person I am. I know how I like things done, and it was easier for me to do everything.

We continued to grow as a restaurant, and it got to a point where I couldn't do everything. It was very sobering to ask for help from other leaders and hand off responsibility. I felt that the restaurant was my baby, and to trust somebody to do as good of a job that I did was challenging. But it was what we needed.

What I quickly learned was that handing off responsibility allowed me the freedom to focus on vision casting, leadership development, and spending more time with customers. These are the things I love to do, and it's what I get to spend most of my time doing now because I trust my team of leaders to handle the day-to-day.

That was a hard thing I had to wrestle with inside myself-- being trusting of other people in my business. But ultimately, it ended up working out for the best.

What advice do you have for women who are taking on leadership positions at young ages?

A: I've got a couple of thoughts.

"Don't be afraid to have a seat at the table"

There is a saying that you can't give with an empty cup. As a mother and a business owner, what do you do to make sure "your cup" stays filled?

A: Man! This was really easy to do before a baby. Now that I have a 10-month-old and I am back to work... it's a lot. I literally have to fight for "me" time. What I've learned is that I'm an introvert. I love being alone, and I love downtime because that is a way for me to recharge.

"To keep my cup full, I have to be intentional about the things that make me feel good."

I'm really quick to say no, to friends, to family, to work...I have no problems setting boundaries. Because I know once I feel depleted, I'm not my best self, and I don't want that for my family or for my team.

What was it like to see yourself going viral on social media?

A: WILD! It was wild. My team members were like, "Ashley, you're on Worldstar!" And I'm like, "What is Worldstar?" So, it was the week of my grand opening (April 2018), and I posted a photo of me sitting on a table in my store. The caption said something along the lines of "Tomorrow is the big day, and we open at 6 a.m. If you're in the LA area, come see me." Someone took the photo and put an overlay on it. There was this caption at the bottom that was like, "Ashley Lamothe, youngest Chick-fil-A franchisee ever" or something like that, and that went viral.

So, Worldstar reposted it, TMZ reposted it, and all of these celebrities started reposting saying things like, "Wow, check out this girl she's the youngest Chick-fil-A owner." It literally happened overnight. I woke up on grand opening day and had like 15,000 new followers. I was like, wait what?

It was crazy to experience going viral, but I think ultimately, it's been a really good (and fun) thing for me. I use the platform to share my personal life and day-to-day. I have also committed to using it as a tool to help and inspire other people. I want to share with others everything I've learned about business and leadership – I think there's room for us all at the top. 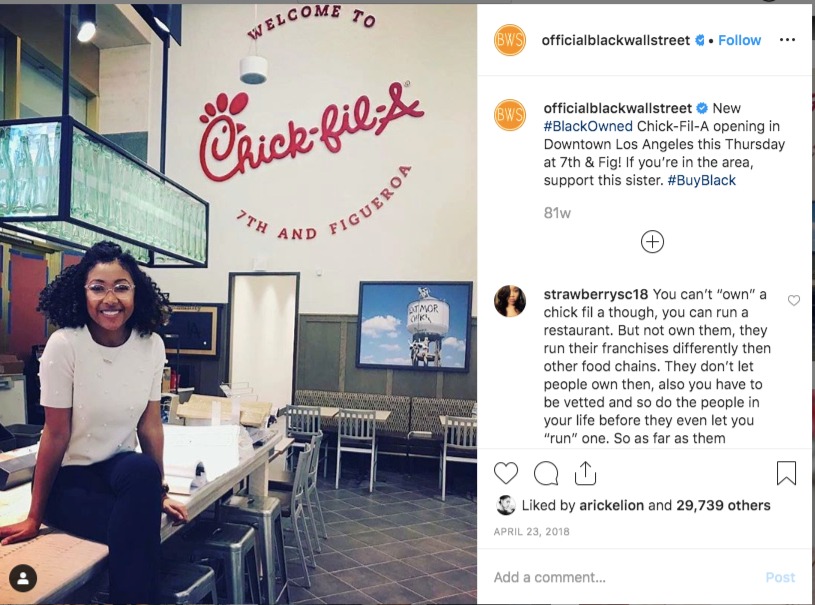 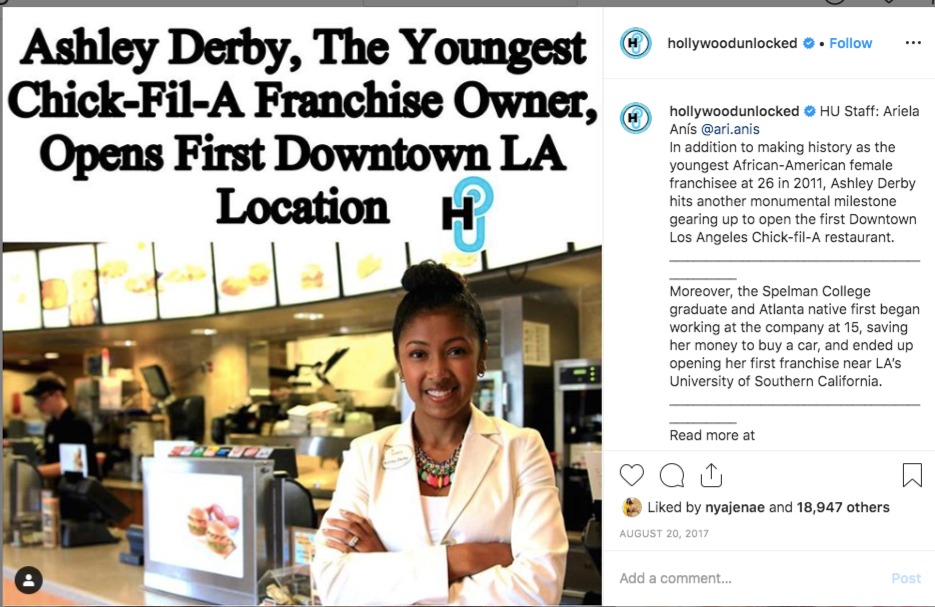 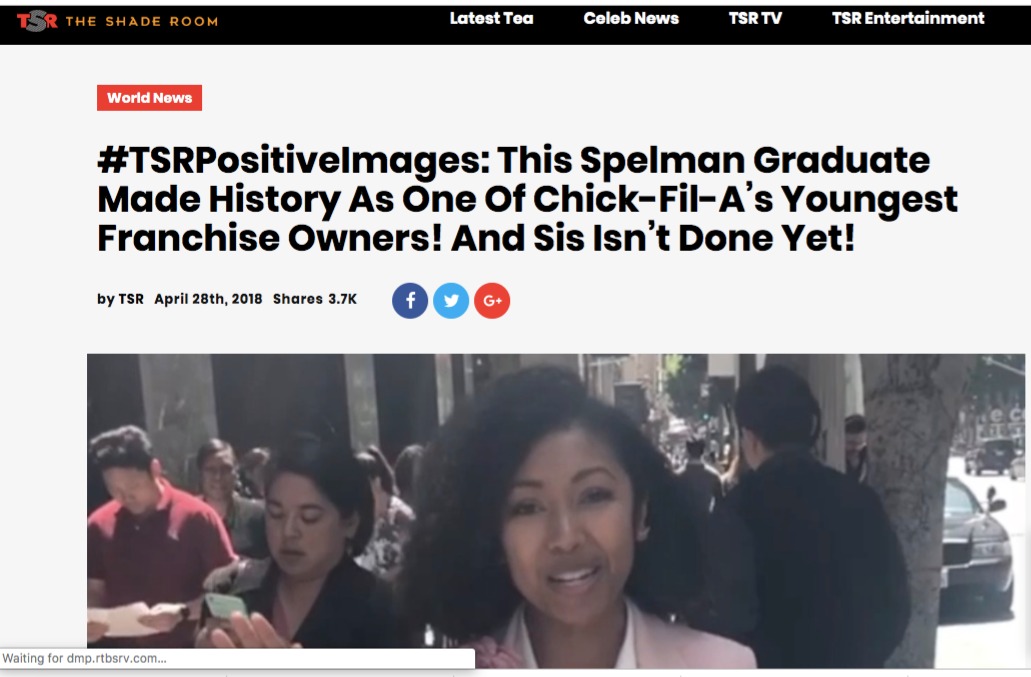 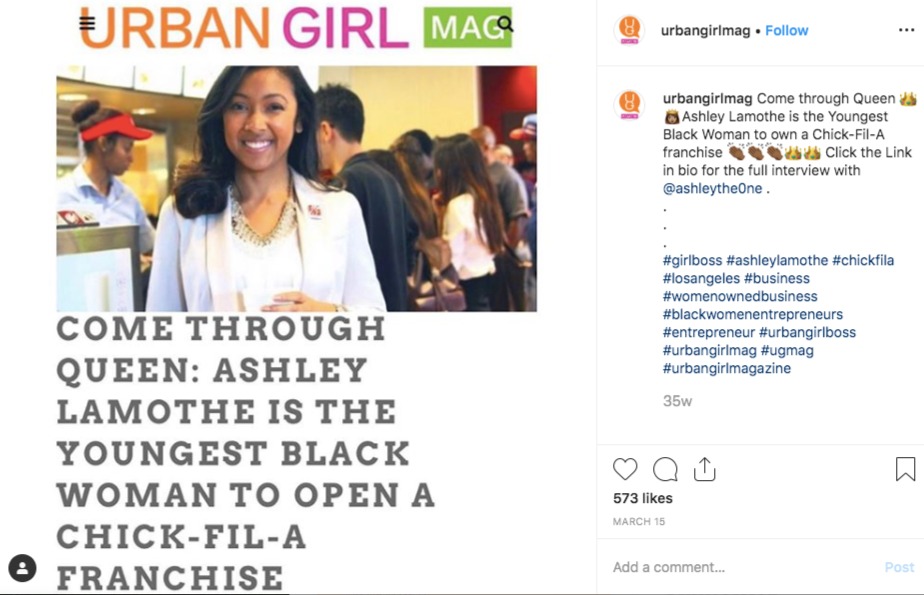 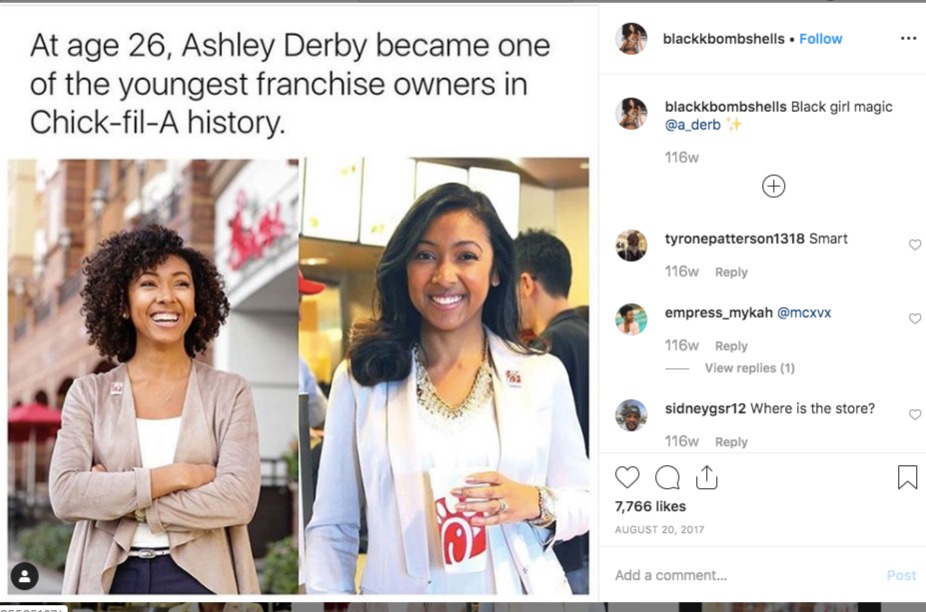 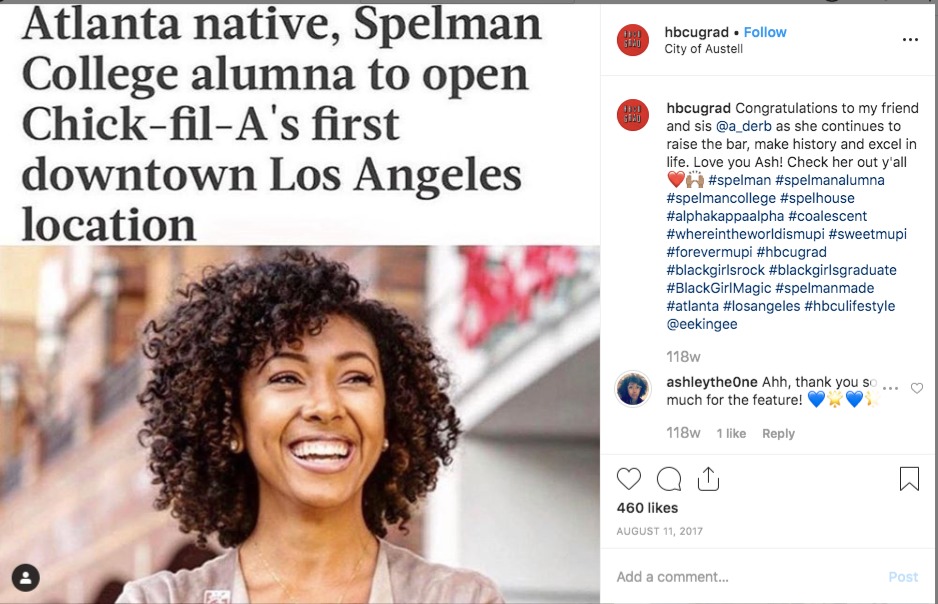 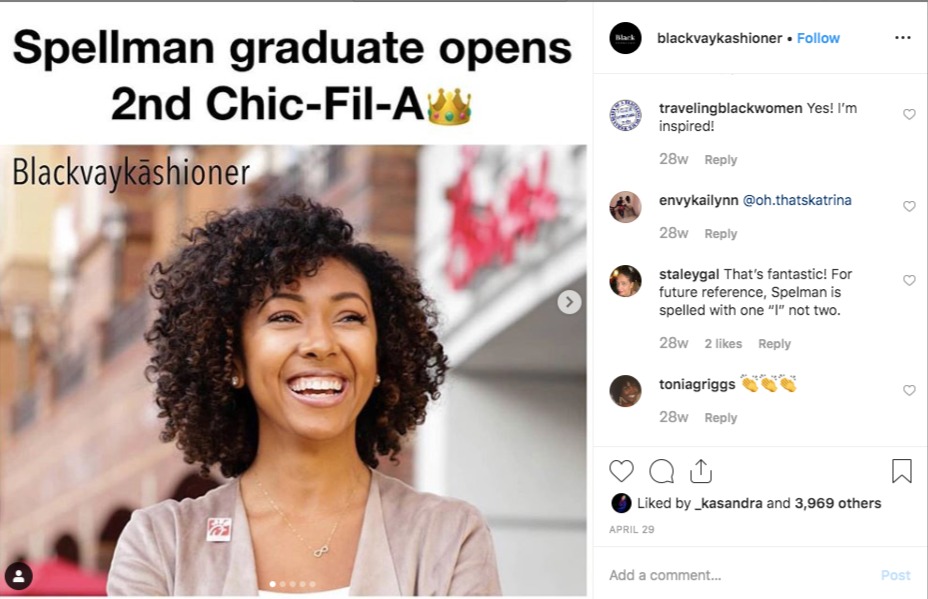 Invested Millennial: A Beginner's Guide to Investing in the Stock Market

A Twenty-Something's Guide to Entrepreneurship with Courtney Caldwell